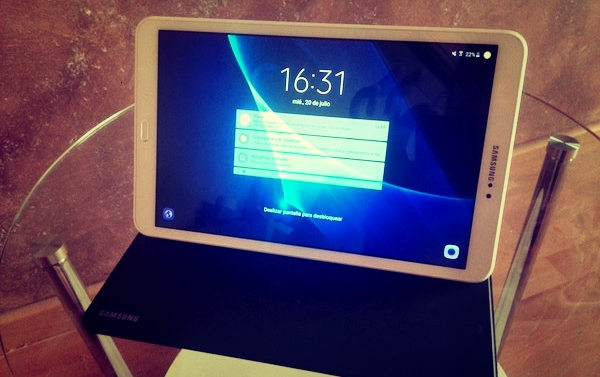 It’s time to analyze the Samsung Galaxy Tab A 2016 tablet in its 10.1-inch version, a mid-range device that has a great balance in all its sections.

A tablet for the general public

Bigger than iPad Air 2 but significantly cheaper. The new 10.1-inch Samsung Galaxy Tab A (2016) lands on the market ready to seduce users looking for a large tablet but are reluctant to spend a fortune on a device that will in practice be used – with exceptions – considerably less than a smartphone.

We are talking about a mid-range tablet with interesting features. It does not and does not compete with Apple’s high-end, as Samsung already has tabPro S in the market, but combines an ergonomic design with high performance, a more than decent camera and a major battery, at least on paper.

In this analysis of the Samsung Galaxy Tab A (2016) of 10.1 inches we will discover its main virtues and defects to try to clear doubts about whether it is worth buying and if, as many point out, we are looking at one of the best tablets for less than 300 euros on the market for its excellent value for money.

Not too fancy or too cheap. That’s the main conclusion of the Samsung Galaxy Tab A 2016 in its 10.1-inch version as soon as you take it out of the box. Reserved the alumunio for high-end devices, plastic dominates in this new tablet of the Korean company, which not in vain surprises by its good finishes and its ergonomics in general.

The dimensions of the Galaxy Tab A (2016) grow bound by the increase of the diagonal of the screen, but they do so in a fairly reasonable way.

The thickness remains at about 8.2 millimetres and the weight rises to 525 grams, so it is a heavy tablet and for many it is already on the limit in terms of ergonomics.

Either way, in our Galaxy Tab A (2016) test we have found that it is convenient to drive and transport whenever we do it inside the home.

You may have some problems if you try to drive it with one hand, but if you’re looking for a lighter device you can always opt for the 7-inch model, which comes out even cheaper.

The glass dominates the entire front of the tablet, which has large but not excessive frames around the screen. We have three buttons: one physical that acts as a Home button and two other trainers. None of them are backlit.

The bad news is that the screen of the Galaxy Tab A 2016, which we will talk about carefully later, gets extremely dirty with our footprints so it is advisable to have a cloth on hand to clean it from time to time.

The left side is completely bare, while on the right we have the off/lock button and the button to control the volume in a correct position. A couple of centimeters down we have the slot to insert a microSD card.

At the bottom edge we have two speakers that promise to offer a good sound experience and on the contrary side we have the jack for the headphones and the microUSB connection port, another sign that we are not facing a high-end tablet.

Finally the back is made of plastic but has good finishes, so it is not uncomfortable to touch. The main camera protrudes slightly from the body and, generally speaking, ergonomics is correct when you consider that we are talking about a device of more than 10 inches.

The diagonal increase of the screen is one of the main novelties of the Samsung Galaxy Tab A 2016, which stretches up to 10.1 inches compared to 9.7 of the previous generation.

Numbers aside the experience when playing multimedia content is satisfactory, especially if compared to the previous instalment of this model, but still too far from what competing devices, including the different models of the iPad, offer.

Either way, the advancement is significant on this tablet when talking about resolution as well as contrast and brightness level. In short, it is an attractive device for the general public that guarantees a good experience when it comes to playing videos or movies, but that stays a couple of steps below the best tablets on the market.

Samsung keeps its commitment to its own processors on this tablet after last year’s Qualcomm experience. This Galaxy Tab A 2016 hides inside an Exynos 7870 processor with 14 nanometer manufacturing technology and low consumption that seems much more appropriate for such a device.

The tablet also has 2 GB of RAM and 16 GB of internal storage that in any case are expandable through an SD card, which is recommended although not as essential as happens on mobile phones with that memory capacity.

The performance tests and benchmarks of the Galaxy Tab A 2016 in its 10.1-inch version yield the expected results, falling well above the previous generation. The tablet has a very fluid behavior in most scenarios, almost without latency even when it comes to managing multitasking, although we do squeeze it to the maximum we will notice how its performance is reduced.

On the other hand, although in this analysis of the Galaxy Tab A 2016 we have enjoyed a rather remarkable experience in general terms if we have detected some very punctual problem with the graphics when it comes to running very demanding video games, something that in a first way does not lower the note in this section.

The latest version of Android has become an essential feature in the latest mobile releases, including mid-range ones and even the cheapest terminals.

This situation, however, is not as common in the tablet segment. In fact, at the time of writing this review of the Galaxy Tab A 2016 we only have two devices of reference brands with similar features that will work under Marshmallow.

Therefore we talk about one of the main advantages of the Galaxy Tab A 2016. Also on this occasion Samsung has not flooded the device with dozens of applications of its own but we are facing a rather light version of TouchWiz that positively affects the performance of the tablet as we have seen before.

And we also have some very interesting news. To start the mode children is wanted as an essential functionality for those who have children at home because it allows to have a thorough control over what the little ones do with the tablet, limiting both the type of actions they can perform with the device and the apps that they can access or even limit the time of use.

But that’s not all. Among the pre-installed apps is the suite of office of Microsoft, something that seems quite justified since we are talking about a versatile tablet that can serve both for work and leisure.

In addition, we can take advantage of some functionalities present in the Android universe that on a tablet of these dimensions takes on a particular meaning, such as the possibility to split the screen in two to watch a video and browse the Internet at the same time.

In the same way we have a private space that allows us to protect our most sensitive data – including files and images – from prying eyes, an option aimed at raising our privacy levels that fortunately more manufacturers are betting on.

The camera of the Galaxy Tab A 2016 grows from the previous generation up to 8 megapixels on the main sensor and is capable of recording video in Full HD while the front camera for selfies is maintained at 2 megapixels.

Obviously taking photos with a tablet is neither the most comfortable nor the most recommended at this point of the film, something that we have checked in our own meats in this analysis of the Galaxy Tab A 2016. However the results are more than decent, to the point that you will be surprised if you have a discreet mobile.